The Sarangi: A Case Study In Colonialist Texts 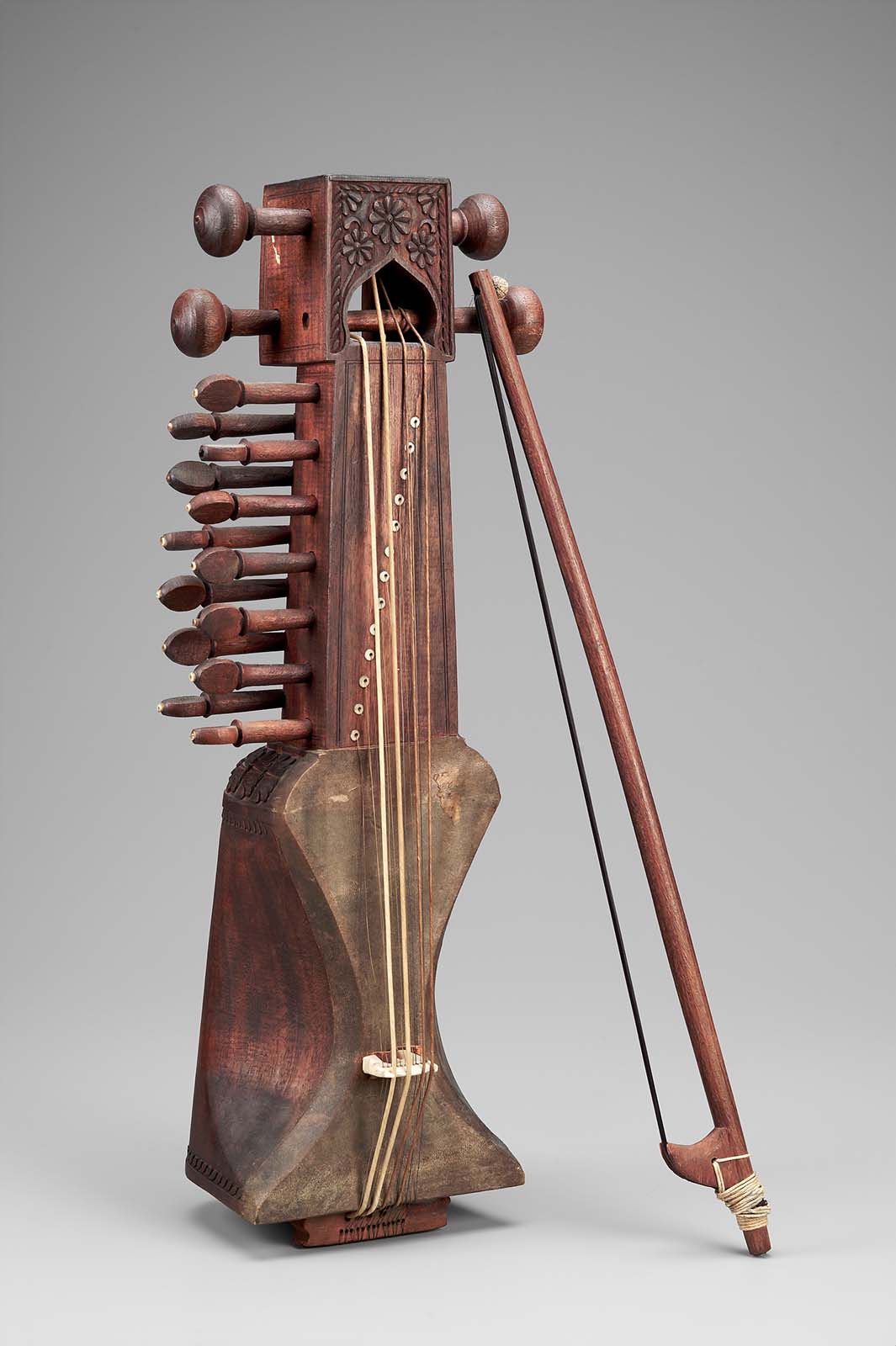 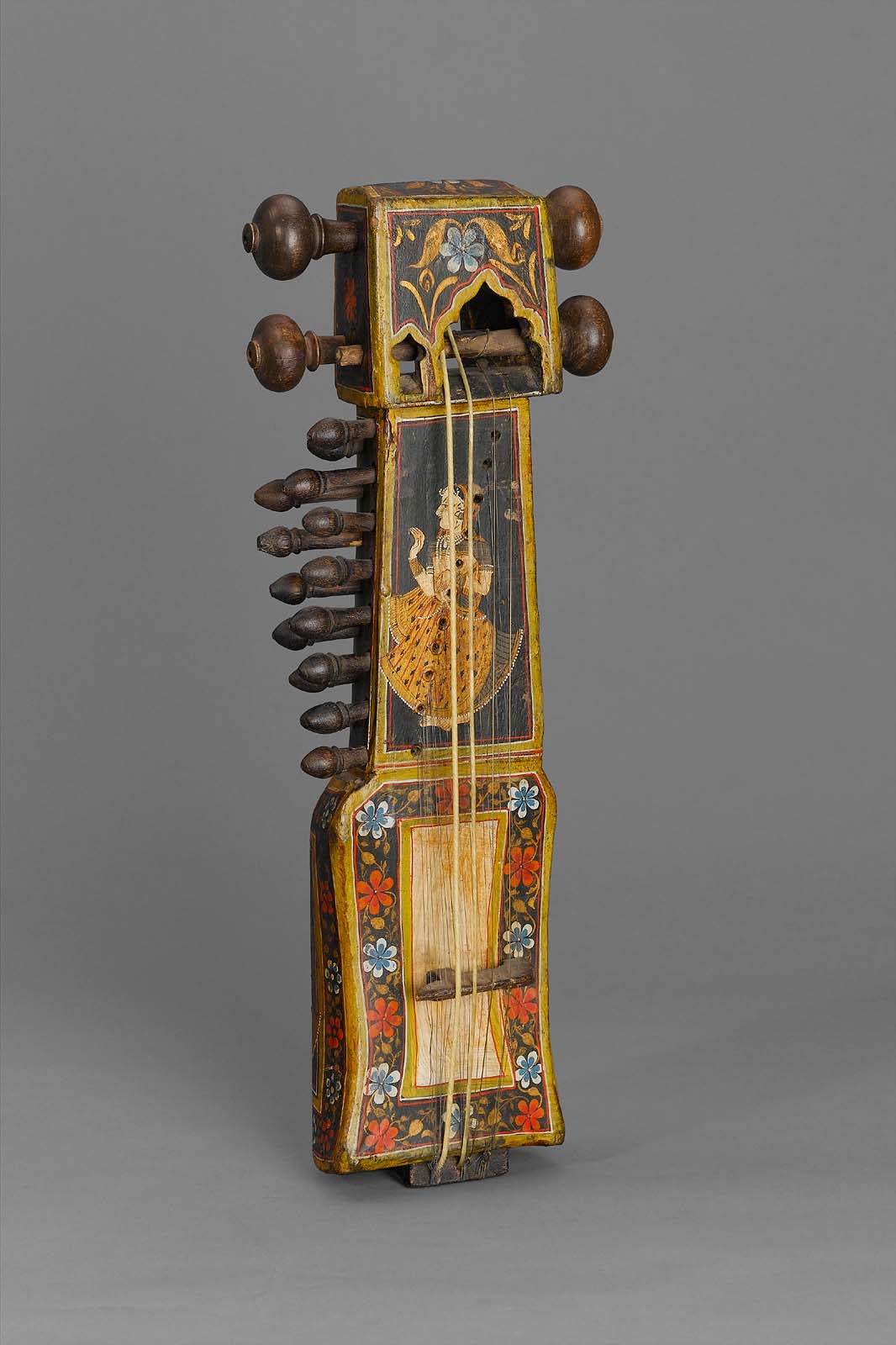 In 2016, I was asked to give three short gallery talks as part of the Museum of Fine Arts annual Diwali celebration (a Hindu holiday). I decided to focus on the sarangi, a Hindustani fiddle used as an accompanying instrument in traditional Northern Indian music. I used, as my examples, two 19th-century instruments from the collection (above). These talks are introductory presentations fifteen minutes in length and therefore it is difficult to go into too much depth about a topic. After discussing the construction of the sarangi, playing a short video, and discussing its general context of performance, I gave a brief overview of the known history and chronology of the instrument. Grove Dictionary and many other sources mention that before and during the British Imperial Period (1858-1947):

The sarangi “had become associated with dancing girls [nautch girls], and this social stigma has been given as a main reason, along with the sheer difficulty in playing it, for the instrument’s decline in the 20th century.”[1]

I mentioned this brief detail at the end of my talk, while also stating that the instrument’s popularity has been increasing over time in the late 20th and 21st centuries. And that basically covered my 15 minute time allotment.

After my talk, a woman approached me and was offended and livid that I mentioned the British Imperial Period and the instrument’s association with courtesans. She asked me:

I was taken aback, and I felt embarrassed for perhaps perpetuating colonialism in my discussion. I admitted to her that while I was not an expert in this subject, and actually showed her some of the source material and photographs I had consulted. This became an opening for a real discussion about the issues surrounding colonial-era histories.

Ethnomusicologist Regula Qureshi, states that while the sarangi has a long history of use in various traditions, dating back to the 11th century, “the story that dominates the sarangi happens at the side of the courtesan singer and dancer (the “nautch girl”), in the hands of her teacher- accompanist-manager whose sarangi music supports her amorous song melody as well as her dazzling footwork. Hence the sarangi is inexorably linked to the licentious and immoral social space where a women offers her art, and by implication, herself.”[2]

Dance historian Priya Srinivasan asserts that ‘nautch’ was a broad term the British used to cover dances from all over India.[3] So what we see here is that even the genre associated with the sarangi is a broad colonial era term. As historians, we have a responsibility to prevent erasure and share many facets of history, which means sharing the complexities of colonialism among other hot-button issues which may be uncomfortable or new to some audiences. Given the time constraints, I perhaps should have continued with my talk by discussing more details of the musical repertoire, instead of merely introducing the complexities of "Nautch" dance and British Imperialism without being able to fully present the issues thereof.[4] To be honest, when I prepared for my talk, I hadn’t considered that mentioning the colonial period would have elicited such a response.

Nautch girl with musicians on tabla and sarangi [5]

Much new research on the sarangi has taken place in the last decade which answers some of the questions I have raised (see my suggested readings at the end of this post). The Grove article on the sarangi was last updated in 2001, and the bibliography includes articles and books dating from between 1966-1987, and thus, does not include the newer research which deconstructs many of the early sources. Furthermore, in the Grove text, the author states that the instrument went out of fashion due to its difficulty to play. That to me seemed like a leap. Many instruments in India’s vast musical traditions are difficult to play. Why would that be a reason this specific instrument would be given up?

Three Reasons for the Sarangi’s Decline (not eradication!):

1. Attending Nautch dance was deemed immoral due to the sensual nature of the dance by incoming Christian Missionaries in the mid-late 19th century. According to journalist Ally Adnan, in the mid-late 19th century, a large number of Christian missionaries arrived in India (after the Suez Canal opened). “The missionaries frequently opposed the performance of nautch, among many other things, by terming it anti-Christian, immoral and repugnant. Officers of the British Raj, who had heretofore been patrons of nautch girls, were asked to not attend nautch performances.”[6]

Ethnomusicologist Max Katz hypothesizes that within Hindustani musical traditions, a hierarchy or caste system emerged between soloist and accompanying roles. Since the sarangi player typically played an accompanying role, he (yes he) was potentially stigmatized. Katz

states that “despite the artistic renown of a given musician, membership in a community of accompanists negated one’s eligibility to claim membership in a “tradition.”[7]

3. Introduction of the harmonium

Ethnomusicologist Matt Rahaim sythesizes research from Qureshi and Bor, by stating that “harmoniums began to replace the sarangi as the principal melodic accompaniment for khyal and thumri vocalists. The sarangi faced many obstacles to wide acceptance in new urban concert settings, such as its association with the musical world of courtesans, the amount of time required to tune it for each raga, and the technical difficulty of mastering it. [He posits that] "the harmonium, in contrast, was free of associations with courtesanry, could be tuned months ahead of time, and was easy to learn. Because the intonation of a harmonium depends far less on the skill of its player than that of a sarangi, [and] even amateurs could become passable harmonium accompanists."[8]

The sarangi experienced a revival in the 20th century. Ethnomusicologist Dard Neuman states: The degraded classes of musicians [including sarangi players] eventually “took the musical world by storm, defining dominant trends in the 20th century…[and] the present-day scene for Hindustani music has resulted from the rise of superstar musicians from the ranks of the accompaniment class”[9]

In Master Musicians of India: Hereditary Sarangi Players Speak, Regula Qureshi, a sarangi player herself, presents an oral history of the major musicians and living traditions from the 20 and 21st centuries. She is careful to point out, however, that many of the master players in the hereditary traditions are of advanced age, and issues of colonialism and nationalism still exist.[10] But the instrument is more visible, due to its presence on Youtube, the website sarangi.net, and even its use in Aerosmith’s 1997 “Taste of India” album. In 2013, the Metropolitan Museum of Art filmed sarangi master Ramesh Mishrah in their galleries, seen here:

It is an exciting time to be working in the field of ethnomusicology. New critical research is reframing commonly held notions of “world music,” and bringing issues of power, perspective, gender, and race into object histories. As those of us who come to the field from an

instrument-centric approach, we must venture outside our field to incorporate new voices and research into our narratives, and thus, into the content we present in our exhibitions and publications. For those of us who work in encyclopedic collections, we see the imbalance of in depth, critical, peer-reviewed scholarship focused on musical instruments in Europe and the United States, compared to the same kind of research on musical instruments from the rest of the globe: there just isn’t enough! And furthermore, our responsibility to care for, represent, and educate our audiences about the various instruments in our collections, is a massive responsibility. We rarely have the chance to lecture on our specialities, thus, we must take the same care in presenting materials related to all cultures, as we would for our unique areas of interest. Thus, I have created a list for myself to follow when presenting new content to the public:

This experience led me to begin to explore how to be more critical of early colonial-era texts. Much of the research done on countries under colonial rule was written during a time when it was typical for researchers to use broad brush strokes to characterize a people, while not taking into account the nuances of cultural context and geography. This blog post is the first in a series which will look at musical instrument collections and how we can begin to reckon with their colonial histories by critically looking at the collectors, provenance, and source materials we use, as well as examining innovative approaches some museums have used to shift the dialogue towards a more equitable field of organology.

Jayme Kurland www.jaymekurland.com is a Virginia-based musicologist, museum professional, and violist. She serves on the board of governors for AMIS, and chairs the Ethnomusicology working group. Currently, Jayme teaches undergraduate ethnomusicology at George Mason University. She also works at Georgetown University Library as a music manuscript cataloger. She previously worked with the musical instrument collections at the Museum of the Fine Arts in Boston, and the Musical Instrument Museum in Phoenix.

Rhythm and Ritual: Music of the Ancient Americas Exhibition